The first step towards breaking stereotypes is changing the way we talk about them.

Language, Gender and Power: The Politics of Representation and Hegemony in South Asia studies the role of language in relation to the complicated issues of power, gender and representation while placing them in a Pakistani context. 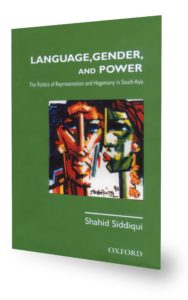 In this new book (which is said to have been in the making for a decade), Dr Shahid Siddiqui provides a contextualised view of how language does not represent anything through its communicative function, but rather shapes our perception and consciousness. This gives it the power to change the way we think and perceive the world around us.

The book is simple and has been written keeping students in mind. It tackles complicated subjects like the control of power or construction of identity through language with immense simplicity. The book also addresses the study of language and its role in disseminating a particular idea of gender through literature and other cultural practices that include proverbs, sayings, jokes, as well as advertisement campaigns. It highlights the propagated desire of a particular kind of gender behaviour and how it is injected into the viewer or reader’s mind through the strategic use of language. The specific local examples such as associating modesty or docility with women which in turn reinforces gender stereotypes, make the concepts relatable and easy to understand.

The author also explores the use of language to represent gender in the educational material. In this part of the book, Siddiqui intensively dwells on the study of nursery rhymes, fairly tales for children and other educational practices which have been stereotyping women and limiting them to domestic roles for generations in the subcontinent.

The chapter, Language, Gender and Media which constitutes the larger part of this book, extensively studies and questions the role of the media in gender construction. The author analyses gender stereotypes in popular entertainment mediums such as advertisements, television plays, films and songs in a manner that presents his thesis in a chronological totality. The crucial argument here is that the representation of gender, of women through a certain kind of language used by the media also becomes the natural way of perceiving them, which may often be far from the truth.