Everyone of us notices almost daily a person, wearing blue or black uniform with a gun in hands, walking along with the power-drunk people, sitting at the front of every bank, huge shops, departmental stores, hospitals, school etc, called security-guard.

This term depresses me a lot as I look at their miserable faces crying out quietly at their unsatisfied longings, their dead, expressionless eyes and their physical appearances showing vividly their poverty and condition of nothingness. 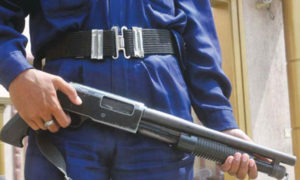 The gun feels to be mocking at them as they cannot secure themselves with that very gun they are holding as a responsibility to safeguard the place where they have been appointed. The incessantly growing crime rate has made it a need to get services of persons called security-guard. After the clear order by the govt to hire proper security-guard on private basis, such agencies got established that claimed to provide so-called trained security guards.

Irony of the matter is that a number of people who are unable to get any other job to run their families, come to such agencies to extinguish fire of their needs and get ready to accept such a tough , low paid but highly risky and hectic responsibility of safeguarding the sky high shopping malls , magnificent markets, glowing and glittering jewellery shops, comfortable palace like houses, hotels, restaurants and educational institutions. 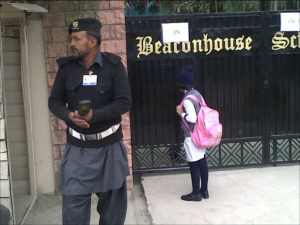 They are protecting the banks where millions of rupees are transacted with penniless hands. They safeguard the houses with large garages and splendid cars while sitting in small mouse’s holes like cabins of tin that are ineffective to protect these very protectors from the severity of weather. They secure the hotels and restaurants with hungry stomach and eyes.

How satirical is it that after having done such a perilous duty they are paid meager amount of 8 to 10 thousand rupees that is ridiculously insufficient to secure joys of life for them. Even they are unable to get the basic needs of life fulfilled. Sitting in front of an educational institution, a security guard remains unable to get the guarantee of education for his own child.

Our society and its so-called thoughtful people have made them dogs who are ready to bark at and attack any stranger or invader at the risk of their own lives.This miserable member of society doesn’t know whether he will come back home safely or the news will be on-aired that he got martyred in an effort to save the bank from a big robbery or educational institution from terrorist attack.

Now that poverty-stricken man will get his reward in the other-world, having left his family reward-less and penniless among cruel, insensitive and materialistic people, dragging the vicious circle of hunger and unsatisfied cravings.