In my student life this quote of Shakespeare used to pinch me a lot “Frailty thy name is woman”. I have been perplexed as i compare this quote with the actual part of woman playing around me.A woman is thought to be weak and fragile physically, mentally, emotionally in a Society dominated by males. Is a feminine really too weak to stand fast , to face and fight against the worse circumstances? or she has been declared and determined so by the men. How sarcastically wrong this notion is . Nature has gifted a woman with the very same qualities that has been given to a man. Rather at times, a woman proves herself to be more vibrant and strong than a man. The responsibilities assigned to a female are much more difficult and hard to perform than the tasks accomplished by the male. If one asks about physical strength, strong and sturdy body then definitely a male has been made structurally more wide, tall and strong and a female fastidious. But the point is whether it is the physical strength that is a matter of importance ? If so, then women working at kilns are equally strong 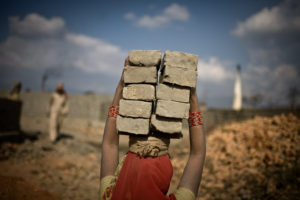 just like their men. They make bricks, suffer the severe heat of fire in the kiln. bake the bricks and carry them to required place.Then there are the women working and serving as house maids all day long  remain busy in hectic physical activities (washing, cleaning, cutting, cocking)which are least considered by our male dominated society. Educated working women play a role which involves both mental and physical exertion. Looking after the kids, doing house hold work and then the job in any office or institution needs energy power and stamina. If after doing all this even then a woman is called fragile , what can be said of a male chauvinistic society.On the contrary, a man doing a business or selling goods in market whether on a cart or at a shop, is all the time physically sitting and doing less exhaustive effort/ activity than a 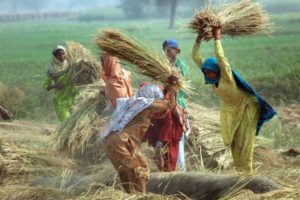 female. In rural areas the women working in fields with their men from dawn to dusk without any discrimination of being weak or soft, falsify this notion that woman is less strong than a man. Similarly the lady doctors, female teachers, lawyers, women working in banks, offices, in police and army performing their duties on equal level rather more honestly and devotedly, slap on the face of so called “honorable society” by proving themselves more strong than men. In Rome , before arrival of Greeks in about sixth century competitions were held among the people, in which the body fitness and sturdiness were to be focused and persons possessing these qualities were to be declared winners. If such competitions are held today in our society (that is suffering from the fever of who is strong and who is weak) sorry to say the wrestlers, the body builders and weight lifters will definitely be announced the most strong persons of the society. But after the Greeks came , mental fitness and enlightenment was equally focused with physical strength . Just a huge bulk of body was not the all that was a sign of strength . Basically it was mental capability , capacity, brilliance and brightness that was set a criteria of being strong and superior. The question is ,Can an educated and successful woman be inferior to an uneducated man who has the bodily strength but mentally he is contributing nothing to the betterment of society? Can Perveen Shakir , Aasma jahangeer, Kishwar Naheed and Nasim Zehra and so on be equal or inferior to any tom dick or harry. So far as the emotional strength is concerned , females have proved themselves to be superior to men.This is the woman who suffers long just to avoid any distress in marital life. Who does not get so hyper that she starts fighting , quarreling even on roads. She has more tolerance and power to control emotions and sentiments no matter what type of they are, either sexual or social. Toughest task of delivering a baby , enduring labor pains is enough to show how strong a woman is. How stupid and rubbish it is to declare the women inferior to men, less powerful or less sturdy than the men even after the greatly hard procedure, women undergo.
Days are gone when it was thought that it is for males and it’s not for females.Male can do this and female can’t do this.Females have proved themselves to be suitable for any type of field and profession 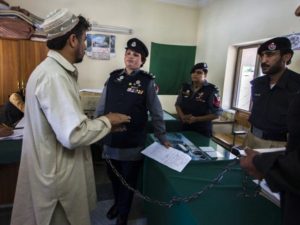 either Engineering, Cricket teams, Army or Police.If a woman is not riding a bike or driving a bus , tractor or Train it is not due to the reason that she can not afford to handle it but because it is considered to be awkward and against the norms and parameters that this male-dominated society has chalked out for a woman.If I don’t get harsh and rude, this rubbish society wants the women to be covered under shuttle cock vails, caught up within the prison of walls where the male is SHO and feudal lord who demands the woman to be just a source of sexual pleasure , productivity and He strengthens this stance by quoting/under the cover of the religious preaching that declare a man to be superior as he supports the family financially and that determines the responsibility of a female just to give pleasure to her male and give birth to babies and bring them up.
This society and its feudal lords are scared and hesitant to accept this reality just because of this fear that this very reality “woman is not fragile” if accepted , would bring their rule to an end.

How tragic and satirical this is that the world has stepped into 21st Century where women have gone into space as astronauts and we (in east) are still trying our best to bring our society to home that woman is not less than a man in any respect.If we want to have a balanced society, keeping its pace with the world , we will have to abolish this gender discrimination.