“Art came to stand for a special kind of truth, “imaginative truth” and artist for a special kind of person.” Raymond Williams 1958, further points out, “while the ‘word’ art had originally simply meant a skill, over the time it became associated with a special sort of skill, an imaginative and creative skill and the product of that skill namely Art became associated with particular virtues.” 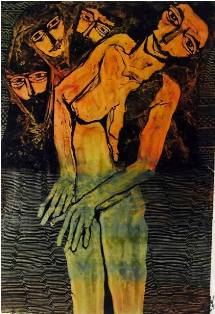 Akram, an imaginative giant, from the far flung village of Baluchistan paints altogether differently. He crafts an art work based on the hierarchy of aesthetic and then his brushes embrace the canvas with the anthropological understanding of the terrains of Baluchistan, a culture where he lives in, and do create life in it through the strokes of ambivalence history. 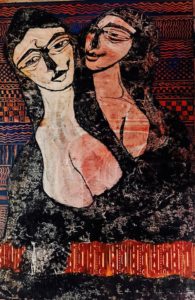 He seeks root civilization of everyday life putting almost fairy-tale reflections by his colors and the strokes.  He began his art career painting heritage and elegantly he developed his skill to bring human suffering and agony into his strokes. Sometime watching deep shades of his artwork, one could find that Akram seems a feminist activist feeling the distress and pain of a woman, he feels in the male chauvinist society. 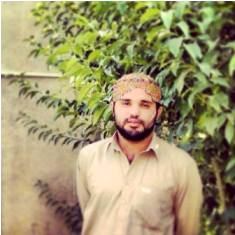 From most of his artwork and paintings one could further feel an abstract description of Islamic history under the layers of colors in enriching background of the Balochistan. He inspires the viewers and art-lovers by portraying human love, the most unheard and unveiled. 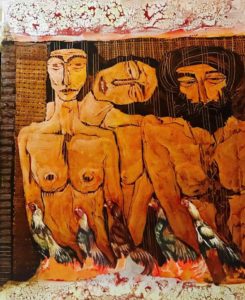 While conducting a critical review, one could choose a conceptual approach with a traditional work of art and emerging technological artwork. Akram Dost’s work has no match at all. Human dilemma, he portrays in abstract art, screams out with the strokes he applies in far swinging passions. The colors, he brushes, divulge the agony of human mind. The Asiatic modernization is his pensive fervor works tremendously. Yet at the same time, he doesn’t want to leave alone the traditional and customary norms, he builds in, far in the back of his mind, while reflecting his own past, in order to keep its sensational relevance intact.