Justice Ejaz Afzal Khan, who authored the main judgment in Panamagate case, believes that disqualification of Prime Minister Nawaz Sharif by the Supreme Court will not only be a deviation from the ‘law and book’ but will also foment chaos, doom and disaster for society.

“We, for an individual case, would not dispense with due process and thereby undo, obliterate and annihilate our jurisprudence which we built up in centuries in our sweat, in our toil, in our blood,” Justice Khan writes.

He believes that such departure would pave way for the subordinate courts to assume jurisdiction of the apex court as well and to allow ‘trigger-happy’ investigation officers to do away with the life of an accused thinking that his trial in the competent court might result in delay or denial of justice.

Apparently referring to the majority judges’ decision, he observes, they were not inclined to arrogate to themselves a power or exercise a jurisdiction which has not been conferred by any of the acts of the parliament or even by Article 184(3) of the Constitution, which deals with the SC’s original jurisdiction.

“Who does not know that making of a statement on oath in a trial lends it an element of solemnity; cross-examination provides safeguards against insinuation of falsehood in the testimony; provisions of Qanoon-e-Shahadat Order regulate relevancy of facts, admissibility of evidence and mode of proof through oral and documentary evidence and thus ensure due process of law,” he notes.

The judges, he says, would not leap over such phases in gross violation of Article 25 (Equality of Citizens) of the Constitution ‘which is the heart and the soul of the rule of law’. “Let respondent No. 1 [Nawaz Sharif] go through all the phases of investigation, trial and appeal,” he says.

For Justice Khan, the solution lies not in bypassing but in activating the institutions by having recourse to Article 190 of the Constitution.

“Political excitement, political adventure or even popular sentiments, real or contrived, may drive any or many to an aberrant course but we have to go by the law and the book,” he writes.

He admits that officers of the National Accountability Bureau (NAB) and the Federal Investigation Agency (FIA) may not lay hands on elites on account of their being amenable to their influence or because of their being beholden to the persons in the matters of their postings and transfers.

“But this does not mean that the SC should exercise a jurisdiction not conferred on it and act in derogation of the provisions of the Constitution and the law regulating trichotomy of power and conferment of jurisdiction on the courts of law.

“Any deviation from the recognised course would be a recipe for chaos,” he said.

Having seen a deviation of such type, he observes, tomorrow an accountability court could exercise jurisdiction under Article 184(3) of the Constitution and a trigger-happy investigation officer could do away with the life of an accused if convinced that the latter is guilty of a heinous crime. 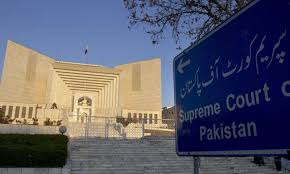 Courts of law decide the cases on the basis of the facts admitted or established on the record, he says, adding that surmises and speculations have no place in the administration of justice.

He says any departure from such course – however well-intentioned – would be a precursor of doom and disaster for the society. It as such would not be a solution to the problem nor would it be a step forward. It would indeed be a giant stride nay a long leap backward, he adds.

“We cannot make a hotchpotch of the Constitution and the law … and pass a judgment … which could well be passed by an Accountability Court after a full-fledged trial,” he concludes.

The judge notes that the bench would have sent this case to the speaker in terms of 63(2) or the Election Commission of Pakistan in terms of Article 63(3) of the Constitution but they did not think a question of such nature has arisen in this case.

[This is because] respondent No. 1 [Nawaz Sharif] has been alleged to be disqualified even on the nomination day on account of having failed to disclose his assets and those of his dependents,” he adds.