Not quite promptly at six o’clock on Saturday morning, two dozen scientists whose fields of study can’t be summarized in a sentence boarded a bus at the Institute for Advanced Study, in Princeton, New Jersey, and headed south, bound for the March for Science, in Washington, D.C. “I hope it doesn’t rain,” Ed Witten, the first and only theoretical physicist ever to win the Fields Medal, the Academy Award of mathematics, said. Witten, who is in his sixties, is tall even when seated and speaks in a measured, almost sheepish tone. He was reading a book about the First World War on his Kindle, a device that, he conceded, he hadn’t yet mastered. The sky, still pale, was cloudy, and the forecast did indeed call for rain. 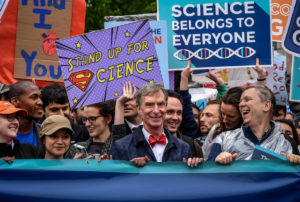 Earlier this year, Princeton University Press published a slim volume called “The Usefulness of Useless Knowledge,” a reissue of an essay by the same name, which originally ran in Harper’s Magazine, in 1939. In it, Abraham Flexner, an educational reformer and the founder of the I.A.S., argued that institutions of learning should be more concerned with cultivating intellectual exploration than with finding immediate applications for scientific research. “Throughout the whole history of science,” Flexner wrote, “most of the really great discoveries which had ultimately proved to be beneficial to mankind had been made by men and women who were driven not by the desire to be useful but merely the desire to satisfy their curiosity.”

Many of the bus passengers seemed to fall easily into that category. At the moment, Witten was untangling the deeper mysteries of quantum entanglement—“how two distant particles can be interacting in a way that’s counterintuitive”—for a paper that he was co-authoring with Douglas Stanford, a gangly, curly-haired postdoc who sat alone a few rows up. Stanford, for his part, was “trying to understand some conceptual aspects of black holes that are confusing.” Having grown up in Washington State, he said, he was “rather happy about the weather today.” He hadn’t made a sign, though. “I’m not completely confident in my ability to capture the right sentiment on a piece of cardboard,” he said. “But I’m not anti-sign, not at all.” Across the aisle, Eva Silverstein—round wire-frame glasses, bright smile—said that her work was divided between early-universe cosmology and the physics of black holes. “I think of both as the dynamics of horizons,” she said. “I can go into more detail if you’d like.”

The March for Science was conceived in January, in the wake of the highly successful Women’s March and in response to a series of increasingly egregious assaults by the Trump Administration on scientific truth and plain sense—the appointment, in Scott Pruitt, of an E.P.A. chief who saw no real need for the E.P.A.; the dismissal of climate change as a reality and even as a phrase; the proposed slashing of the budget of the National Oceanic and Atmospheric Administration, one of the agencies responsible for gathering climate data. In the ensuing weeks, there was much discussion about the proper boundaries between science and politics, the precise aims of the March for Science, and whether scientists should take part in it. But, by yesterday, organizers were expecting tens of thousands of participants in D.C., and satellite marches had been planned in more than six hundred cities around the world.

At nine-thirty, the I.A.S. bus reached R.F.K. Stadium, two miles east of the U.S. Capitol. The passengers filed off and, as a loose pod, headed down a long sidewalk in the supposed direction of the Metro. After a hundred yards, they stopped and looked around, puzzled. Witten pulled out his phone, queried Google Maps, and adjusted course. By the time the group had arrived on the National Mall, the rally was under way. Questlove was playing on a stage, interrupted occasionally by notable speakers, including the educator and television personality Bill Nye and Mona Hanna-Attisha, the pediatrician who helped alert the country to the water crisis in Flint. A light drizzle had begun to fall, and people approached from every direction wearing clever T-shirts and carrying handmade signs:

There was an entrance to the rally ground on Seventeenth Street and Constitution Avenue, but the lines to get through the bag check were backed up several blocks. Sue Perna, an artist from Virginia, and her niece, Jessica Balone, stood halfway down the line with signs that read “Trump is Dumb and Also Stupid” and “Trump: Peer-Reviewed Imbecile.” Perna said, “I see myself as a fill-in for all the scientists who aren’t here.”

I had arranged to meet Robbert Dijkgraaf, the director of the I.A.S., on the corner of Eighteenth Street. He arrived around eleven, tall and blond and brimming with enthusiasm under his umbrella. He had just given a speech at the National Math Festival, held in a nearby convention center. “I talked about the big bang and the future of the universe,” he said. “Just small stuff! I’m half a mathematician and half a particle physicist. I sometimes feel like a quantum particle, trying to be in two places at once.”

Dijkgraaf wrote the introduction to the new edition of Flexner’s essay, but since Inauguration Day the concept of useless knowledge had begun to seem a little quaint. “I now feel like I have to write a prequel: ‘The Usefulness of Useful Knowledge,’ ” Dijkgraaf told me. “Reality has the irritating behavior of being right, and in the end you pay a price for not listening.” So much has happened, he said, in the decades since Flexner’s time—microelectronics, genomic science—that it can be hard to actually comprehend. “In some sense, the evidence of the usefulness of science is all around us,” Dijkgraaf said. “It’s in our back pockets, in our blood streams. We are governed by science—everybody is, even the people who aren’t supportive of it. But we are simply not aware of it anymore. It’s infinitely close by and infinitely far away.”

At around noon, science, expressing itself through an app on my phone, indicated that the drizzle would turn to steady rain in ten minutes. Now the band played “On the Sunny Side of the Street,” soon followed by ominous music that accompanied a video montage of melting glaciers and calving icebergs. Two hundred yards from the stage, a large group of rallygoers had sought shelter in a grove of low, dripping trees. Elementary-school science teachers huddled close to stubble-faced grad students in organic chemistry. Signs not written in indelible marker or carried under clear plastic had begun to streak. The crowd was an impressive mix of ages and interests, the men no more numerous than the women. “I love that there’s so much diversity here,” Salaha Warsi, a plant pathologist, told me. But it was hard to miss the pervasive whiteness. “It’s pretty stark,” she said.

Not far away, a voice was audible through the neck of an eight-foot-tall inflatable T. rex suit. The geology major inside wasn’t sure what he wanted to do after graduation, he said, “but I am well-rounded.” He was wearing the dinosaur costume to keep dry. “I forgot about the rain,” he said. “I didn’t bring good enough clothes. My professor let me borrow his suit.”

Right at two o’clock, the activity onstage ended and the rally-goers became marchers, inching up Constitution Avenue. “Science takes a very long time,” a cell biologist near me said. Every few minutes, a cheer rose from somewhere far ahead and swept down the length of the crowd. A blue-eyed young man introduced himself to me as Daniel Kammen, an energy-and-resources professor in the public-policy school at U.C. Berkeley. As an employee also of the State Department, Kammen had been working with governments in Africa and the Middle East on climate and renewable-energy issues. He was one of several such science envoys, holdovers from the Obama Administration who had been asked to stay on for another year—though it wasn’t clear whether that was simply an oversight. “The State Department is almost unstaffed at the assistant-secretary and under-secretary levels, which means there’s no one to turn the program off,” Kammen told me. He had joined the march, he said, because “for me it should be a no-brainer that science is a good thing.”

Outside the U.S. Department of Commerce building, Susan Sharp, a silver-haired woman from West Virginia, watched the crowd flow past alongside her nine-year-old grandson, a doe-eyed boy in a baseball cap and oversized rain jacket. At nine months of age, he had been diagnosed with neuroblastoma and undergone eight rounds of chemo. He didn’t remember the experience, but he was carrying a sign on red cardstock that read “Science Saved My Life.” A young woman wearing a black “March for Science” T-shirt and matching cap estimated that five hundred people were passing by every minute, which would put the total number of participants in the tens of thousands. “This is the biggest march for science ever,” a friend of Sharp’s said, fully aware that the event was also the first of its kind. “It’s yuge!” Sharp said. Two T. rexes waddled past, one of them presumably the geology major.

The bus left for Princeton promptly at six o’clock. Twilight turned to darkness, and the overhead lights flicked on as people settled into their reading. Stanford was going over a scientific paper titled “Analyticity in Spin in Conformal Theories” and what looked like some complex mathematical equations. (“It’s kind of hard to explain,” he said.) Stanford told me that he had marched all the way to the Capitol. Nearby, he had seen a group gathered around a rock wall, arguing over what type of rock it was. “And I saw another group doing the same thing around a tree,” Stanford said. He laughed. “They were taking a photograph of a leaf!”

In the seat just across the aisle from me and one row up, Scott Tremaine, a white-haired astrophysicist, was also going over some math, a page of equations he’d written in blue pen. Earlier in the day, Dijkgraaf had said that his favorite mathematical symbol is the equals sign; it was invented, in 1557, by a mathematician who wanted to avoid having to write the phrase “is equal to” again and again. “I like how it makes two seemingly dissimilar things, a and b, identical,” Dijkgraaf had said. “And I like the fact that it has two strands, as if it’s connecting in both directions, like it’s an electric cord going from a to b and b to a. It’s what makes the ‘Aha!’ light bulb go on.”

Tremaine came back and sat next to me. He gestured at his notebook. “It’s my train problem,” he said, meaning a problem sufficiently contained that he could think about it in spare moments, while in transit. Tremaine was happy that most of the placards he had seen that day weren’t partisan. “The sentiments that were expressed were ones that you wouldn’t think needed to be expressed,” he said. “If I’d gotten my act together and written a sign, it’d have said something like, ‘In a thousand years, the only thing America will be remembered for is its science.’ That will never go away.” We talked for a couple more minutes, then Tremaine returned to his seat, pulled from his bag a copy of “The Usefulness of Useless Knowledge,” which he’d never read, he said, and got to work.

Alan Burdick, a staff writer, joined The New Yorker in 2012, first as a senior editor and then also as the editor of Elements, newyorker.com’s science-and-tech blog. He worked previously as an editor at the Times Magazine, Discover, and OnEarth, and as a writer and producer at the American Museum of Natural History. He has written for magazines including Harper’s and GQ, and is the author, most recently, of “Why Time Flies: A Mostly Scientific Investigation.” His previous book, “Out of Eden: An Odyssey of Ecological Invasion,” from 2005, was a finalist for the National Book Award and won the Overseas Press Club Award for environmental reporting.